Like any other registration number, an aircraft’s tail number exists in order to keep an official record of the aircraft and to easily identify it in administrative, logistic, and financial situations. Because of this, there are different ways to consult the registry attached to the airplane by way of an aircraft tail number lookup. Let’s take a closer look at what this number is in the first place and the different ways you can access the information related to it.

An N-number is the official name of the identifying number given to all aircraft in the United States upon registration. Given the placement of this number on an airplane’s tail, these are unofficially known as tail numbers. This number is assigned by the Federal Aviation Administration, and it grants an aircraft a unique number under which all relevant information relating to the aircraft will be filed and cataloged going forward. Even if the airplane itself changes hands at some point, the N-number will remain the same under the new ownership. This makes it easy to compile and access all relevant information across different owners, facilitating an aircraft tail number lookup when needed.

Getting Your Tail Number

In order to get your tail number, all you have to do is register the aircraft with the Federal Aviation Administration. Don’t worry, this process is very simple, and it mostly just involves submitting a form to them. You will mostly just have to provide them with your contact information (or the owner’s, in case you’re acting on their behalf), and the aircraft’s manufacturing details, which you will most likely receive from the seller. Once you’ve applied for registration, it will only be a brief matter of time before you receive your N-number and are able to display it on the tail of the aircraft accordingly. 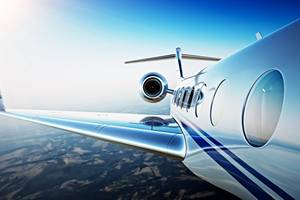 Now, if you need to consult with the Federal Aviation Administration’s Civil Aviation database in regards to a particular N-number, they have two mechanisms by which you can do so. On one hand, you can search their online aircraft tail number lookup for some straightforward basic information about the aircraft in question. If you need more thorough data, though, you can request an abstract, which you can do via a form on our website. This will get you a comprehensive summary of the aircraft’s documentation history so that you can confirm, cross-check, and consult any sort of doubts, concerns, or queries you might have in relation to the aircraft.

Keep Your Aviation Documentation in Order

While dealing with the Federal Aviation Administration might seem complicated or annoying, you don’t have to worry too much, for we can actually take care of most of it. You can find most of the relevant forms here at the National Aviation Center, and submit them through our platform. We’ll make sure everything is in order before passing them along to the FAA. Should you need some additional help with your aircraft tail number lookup, don’t hesitate to use our website chat, fill out our contact form, or give us a call at 1-800-357-0893 and we’ll answer your questions in no time.